I made my childhood best friend Livia’s logo and business card. Since her name is very graphical by itself when written in capital letters, I used it as her symbol. LIVIA. I recognized some equilateral triangles and inclined the “I” letters in the 60 degrees logic. Livia’s name derived from

Working out my own identity – a logo to promote my creative but professional work, clean, simple, symbolic and personal.   a diagram explaining the logic of the logo – M and K initials (my name is Katarina Mijić) formed by a square and a triangle, and their superposition in the way 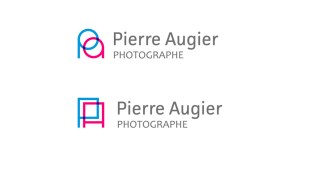 Identity work for a professional photographer and his weddings section representing his initials P and A with a preview of the evolution of the symbol and different propositions I made. working the P and A around the camera symbol, rings, photographs… the chosen weddings logo representing photographers’ initials “p” and “a”, a groom